Madden NFL didn't have a great 2020. The PS4 and Xbox One version was panned by critics and fans alike, many who zeroed in on the perceived deficiencies of single-player modes like Face of the Franchise and Franchise Mode. It was also buggy. Really buggy.

Like most games in 2020, Madden NFL had to deal with the unprecedented challenges brought by the COVID-19 pandemic, which forced the team to shift to work from home right in the middle of development. EA also had to deal with a console transition — always a tricky period for a sports game as developers try to balance old and new tech. 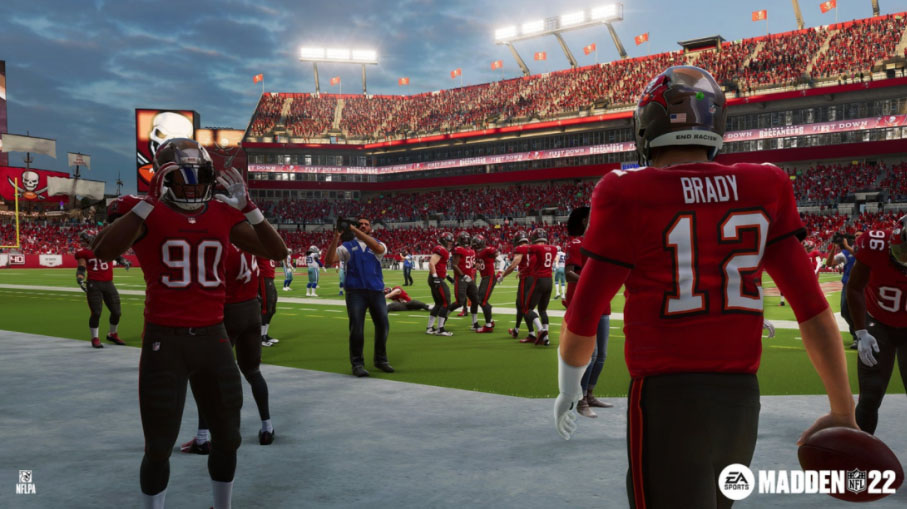 1.A coaching tree is being introduced: Outside of homefield advantage, another feature that Madden 22 is seemingly lifting from NCAA Football 14 is the ability to hire offensive and defensive coordinators and improve them through a skill tree. It's a long-requested feature that should add a solid layer of depth to franchise mode. As for its inspiration, Executive Producer Seann Graddy says Madden isn't looking toward NCAA Football. "[H]onestly, their influences are more rooted in games like God of War," Graddy says, "My son and I have been playing a lot of it."

2.Scouting will be updated... later: Scouting has been another sore point for franchise mode, and fans will be happy to know that it's finally being overhauled in Madden 22. It's just not happening right away. Graddy says the team considered pushing the update to Madden 23, but ultimately decided to make it part of a live update. "We've been treating the whole game and certainly not just franchise like a live service," Graddy says. "So we said, well, let's continue to work on it and get it out, you know, close to the NFL season in that September timeframe. So the fans can have it this year." When it does arrive, it will feature elements like a dynamic draft board that changes throughout the year

3.Franchise will include more than 35 new scenarios: A key criticism of Madden's franchise mode in recent years has been its scenario engine — a one-dimensional attempt to add a bit of storytelling to each game, usually in the form of accounting for the other team's star player. In response, EA hired a community member to build up the engine, and they have responded with some 35 new scenarios. "This year we hired somebody out of the community who is super passionate about this, taught him the tool, and allowed him to create, I think, some really compelling scenarios," Graddy says. "I think you're going to enjoy the refresh."

5.The Super Bowl presentation will finally be different: After years of pointed videos showing how the big Super Bowl trophy presentation hasn't changed a bit, Madden 22 will be changing things up this year. The improvements will be joined by updates to the broadcast package, including flyovers and a great big American flag.

6.Superfans will be in the stadium: Back in the days of Madden 12, crowd close-up shots were a major part of the game's presentation, only fading away when the PS4 and Xbox One rolled around. Crowd close-ups (ironically) returned in Madden 21, and now Madden 22 is enhancing them with so-called "Superfans" — cosplaying fans who serve as a sort of team mascot. Plenty such fans exist in real-life, but characters like Fireman Ed won't be leading the J-E-T-S chant in Madden 22, alas. EA says the cost of tracking them down and adding their likenesses would be just too high.

8.Next-Gen Stats rolls into Year 2: Last year, the next-gen version of Madden 21 introduced Next-Gen Stats — an ambitious attempt to use real-world data gathered from on-field sensors to give star players bespoke animations and other improvements. As expected, Madden 22 will include a multitude of enhancements to Next-Gen Stats, with data governing passing aggressiveness, how ballcarriers break tackles, and team strategy. This is on top of improvements being made to sideline detection, tackling mechanics, and other gameplay features.

9.The PS4 and Xbox One versions are also getting updates: While EA's focus has plainly shifted to the PS5 and Xbox Series X, previous-gen consoles will continue to be supported for another year. Graddy confirms that all of the modes should be very similar across all platforms. "So Face of the Franchise is going to be very similar between Gen 4 and Gen. Ultimate Team will be very similar. The Yard and Superstar KO, which we didn't talk about a lot, those that are going to be a fairly similar," Graddy said. "With franchise, staff management will be there, game planning will be there, but some of the other dynamic gameday elements around atmosphere, and obviously the Next-Gen stats gameplay, which is only available on Gen 5, won't be there. But I think our Gen 4 audiences are going to be happy with a lot of the content that they're getting."

All in all, Madden 22 is an intriguing update on paper, with lots of interesting improvements to the PS5 and Xbox Series X|S version in particular. Much will depend on EA's execution, which has been lacking of late. A little bit of extra polish would do wonders for the series as it forges ahead on next-gen consoles. We'll see whether EA takes that lesson to heart when Madden 22 launches later this year.